In July of 2018, Karmel Larson and the Momni team joined the RevRoad family. It was among the first drops of what will grow to be a tsunami.
Within weeks, Karmel secured coverage on the Dr. Phil Youtube channel. The story about the global childcare crisis caught the attention of more than a million viewers, and soon local press took notice.
Moms from around the country joined as Momnis, apps were published, and a rivulet formed.
On Friday, the Momni team turned those first droplets into a roaring river. She and her team secured a total of more than $2 million in funding to aggressively develop new features and open new markets for caresharing around the world.
The round was led significantly by Tamarak Capital, a Utah family office, and was accompanied by investors from Utah venture service firm RevRoad and angel investors.
“Now the Momni family is getting bigger, bigger and bigger and I”m feeling so grateful today,” Karmel said during the signing celebration. “I am so grateful for all the support I’ve received as Momni has taken off.”

Larson was inspired to start Momni after learning about the global childcare crisis in 2017. The company released iPhone and Android apps earlier this year to help moms connect with one another digitally.
Momni’s platform connects moms’ existing network of friends they already know and trust. Most recently, the company was featured on the Dr. Phil Youtube channel.

Fighting back tears, Karmel expressed thanks to her first supporters — her husband and children.
“Brigham was our first investors and the secret behind the power of Momni,” she said, “And my children have sacrificed so much to have their mother be a part of Momni. Thank you so much for supporting their mother so other mothers can have childcare.”

Before the signing part on Friday, Karmel expressed gratitude to Tamarak for seeing the promise in her company.
“Statistics show that it’s hard for female startup founders to get funding, and I am encouraged by the overwhelming interest we’ve received to help moms worldwide support one another with a cutting-edge and network-based childcare platform,” she said.
“Few things are as socially significant as what Momni is focused on” said Nate McBride, partner at Tamarak Capital. “Momni is making a difference for families worldwide by harnessing technology to both improve the quality and accessibility of childcare in our communities — all while allowing Moms an additional source of income to improve their own lives. We have been so impressed with the Momni team, their product, and the impressive traction they’ve generated so quickly. They are a very talented team, working on a significant challenge, and we are proud to work with them in solving it for good.”
Larson considers Momni’s recent round to be an encouraging step in the right direction for female entrepreneurship, although female founders still encounter difficulty in raising funds.
A study released by the Boston Consulting Group and MassChallenge, a network of startup accelerators, found disparity in the size of deals as well. The average female-founded startup received $935,000 in funding, compared to $2.1 million awarded to the average male-founded startup. That’s despite the fact that female-founded startups performed better, bringing in 78 cents on the dollar in five years compared to 31 cents for men.
For Karmel, the funding is a sign of progress for women in entrepreneurship. But most importantly, it shows the power of what Momni will become.
“We are growing from a drop to a stream, to a river, to an ocean, to a wave, to a tsunami, she said, brimming with joy. “We will conquer the earth with this Momni tsunami.”

Momni is a revolutionary, sharing-economy tech company that seeks to link all moms everywhere for caresharing. Momni offers instant access to trusted care by mothers in your Momni Circle and community. The company works closely with the Momni Foundation to provide caresharing opportunities to women and families in the developing world as a solution to the global childcare crisis. 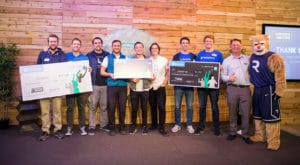 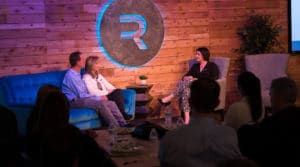 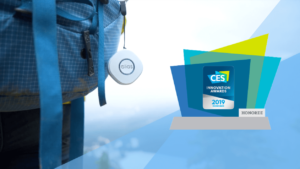