Last week, one of our Roadies unveiled a line of portable power devices that incorporate global GPS tracking capability at the Travel Goods International in Las Vegas.
The show was a great success for GoPlug, and garnered press coverage from major publications such as the LA Times. As a bonus, GoPlug Founder Josh Cross walked away with the Best Booth Award in his category. 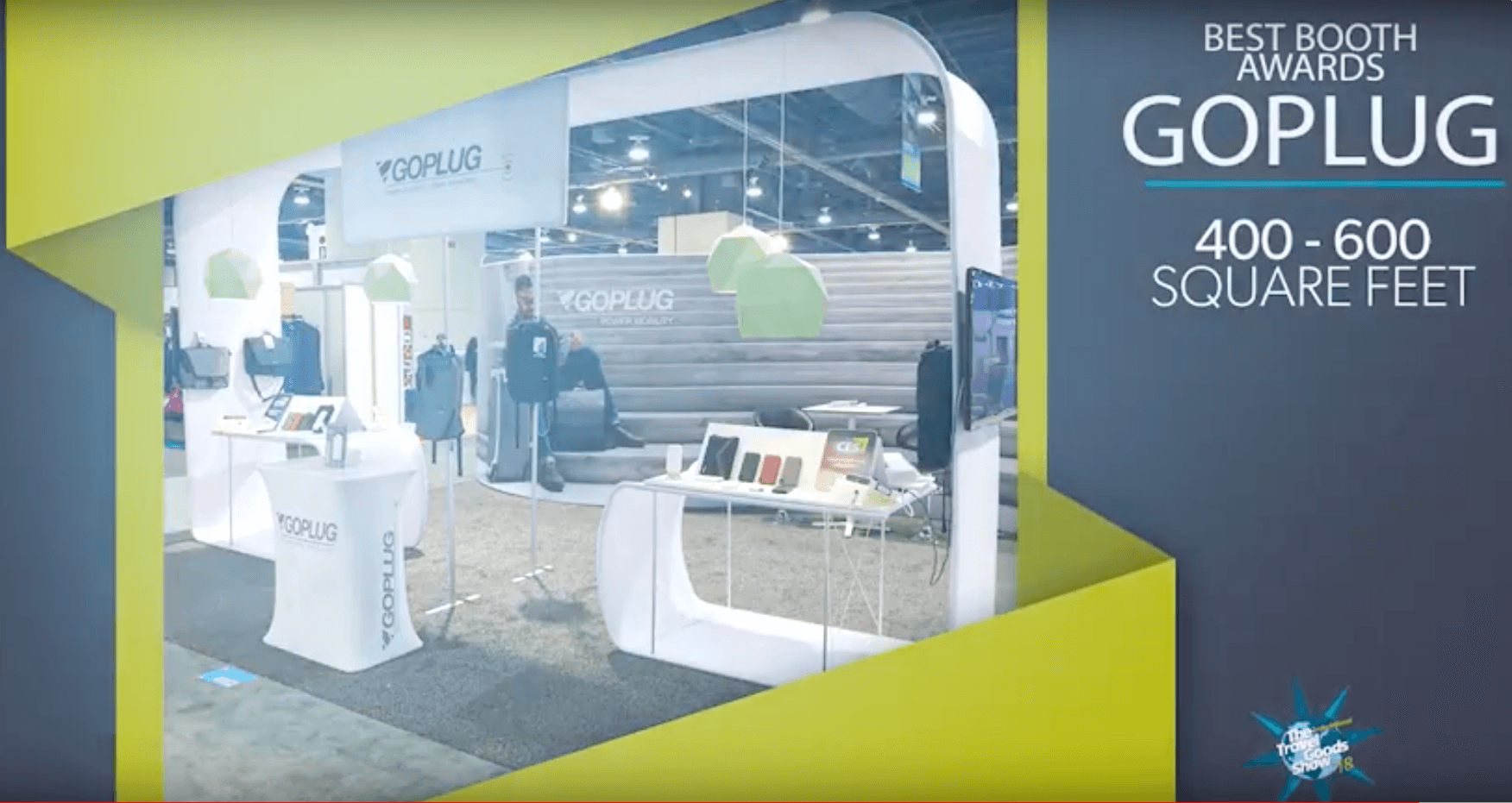 “I actually built the booth myself,” Cross said. “I was surprised that I won, especially considering all the other great booths at the show, but I’m excited to get the word out about all the exciting innovations we have this year.”
Watch the awards video.

GoPlug made its return to Vegas after being recognized as a 2017 Innovation Awards Honoree at the Consumer Electronics Show.
That year, GoPlug launched its SMART Power Bank, which includes AC power, GPS, Phone Alerts, and a Movement Alarm. Anything you can plug into a wall can be plugged into the GoPlug SMART Power Bank.

Now, that asset trackability and portable power has been extended to a range of Internet of Things (IoT) products and devices. In addition, the new line includes optional SOS panic buttons for personal security. Every device will work in more than 145 countries, and it’s all connected with a simple, easy-to-use smartphone app. The products will be available later this year.
“GoPlug beats the competition on power and trackability, and we added the panic alarm to make it useful for people on-the-go, wherever or whoever they are,” Cross said. “Life shouldn’t be controlled by your batteries, and we solved that. But it shouldn’t be restricted by the reach of your Bluetooth either.” 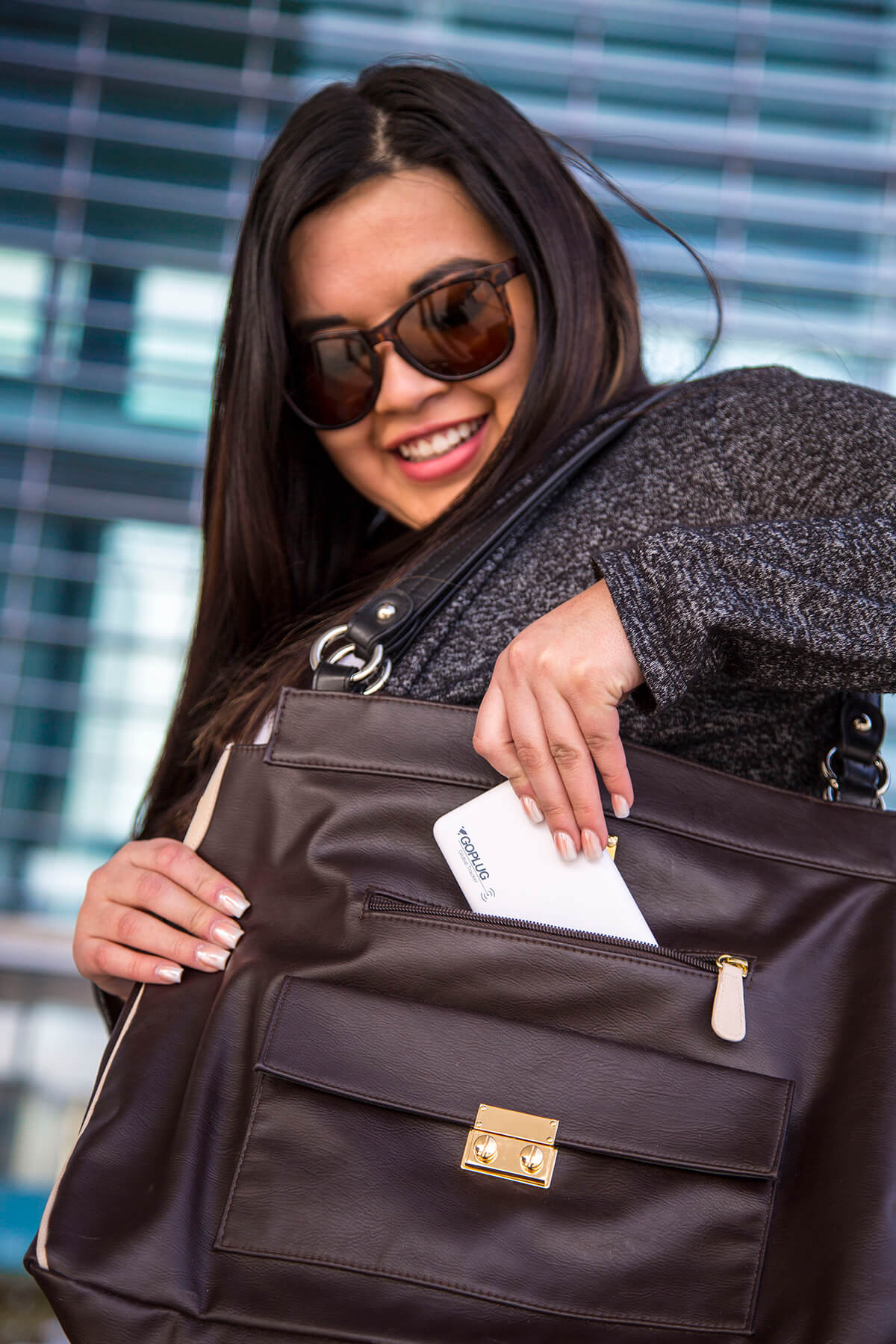 The lineup includes micro trackers with SOS panic buttons, which were designed for everyday use and are ideal for children, the elderly and anyone in need of a discreet safety solution. They easily attach to keychains, luggage and other devices.
The line’s slightly larger power banks are ideal for handbags and carry-ons, while the solar tracker power banks were created for adventurers and travelers anywhere in the world. Similarly, the Wifi Hotspot AC Power Banks are perfect for connecting and charging all your devices, no matter where life takes you.

While most other trackers rely on Bluetooth and battery-draining GPS, GoPlug integrates WiFi/GSM and low-power GPS chips. Now, rather than just tracking your items 100 feet or simply telling you the last time your device was connected via Bluetooth, you can track almost anything, anywhere in the world. GSM, which stands for Global System for Mobile Communication, is the technology mobile phones use.

On Wednesday, one of our newest Roadies went head-to-head against dozens of other student entrepreneurs at the Utah Valley University Opportunity Quest Competition.
By night’s end, they walked away with first place recognition, $4,000 in prize money for their business and a chance to compete on the state level.
They also got the chance to spread the message about their plan for a new social platform for gamers, and were thrilled by the response from the crowd.
“We were most excited that a lot of people came up to us afterward and said they were really excited for the platform,” said Cameron Adamson, Prolink Cofounder. “Not even the judges — a lot of people from the audience were asking about the product and when it would launch. It was great product validation for us.”
Prolink is in the early stages of building a social network focused on eSports and connecting gamers.  Now, people can find information about the players they care about, but they have to go to multiple sites to do so. The problem is complicated by the fact that most competing social sites rely on anonymity.
Prolink intends to change that by providing a one-stop-shop for all things gaming. It also plans to connect people’s handles with their real names, making it easy to find friends, family and coworkers who play games you care about.
“With Prolink, people will be able to share the content they want to share about the games they love,” Cameron explained.
As part of Wednesday’s win, Prolink was automatically entered as a finalist in the Utah Entrepreneur Challenge, to be held April 7 at the Lassonde Institute at the University of Utah. The winner will take home $40,000 for their business, and additional prizes will be granted for best business model, presentation and technology.
We believe in Derek and Cameron, and we agree with last night’s audience — we can’t wait for the launch!

Josh Cross started his career in post-production for stop motion films, working on projects in Hollywood with superstars such as producer Ron Howard, video producers Will Vinton and Brian Grazer, and actor/comedian Eddie Murphy, Richard Dreyfuss.
He enjoyed the work, he said, but wasn’t finding a lot of meaning or purpose in it. That’s when he moved to Utah to join the edtech company Imagine Learning. There, he started a video department that focused on telling stories about inequality in education. He and his team created over 8,000 videos for the product and in locations across the globe.
Josh didn’t know it at the time, but his career trajectory was far from over. 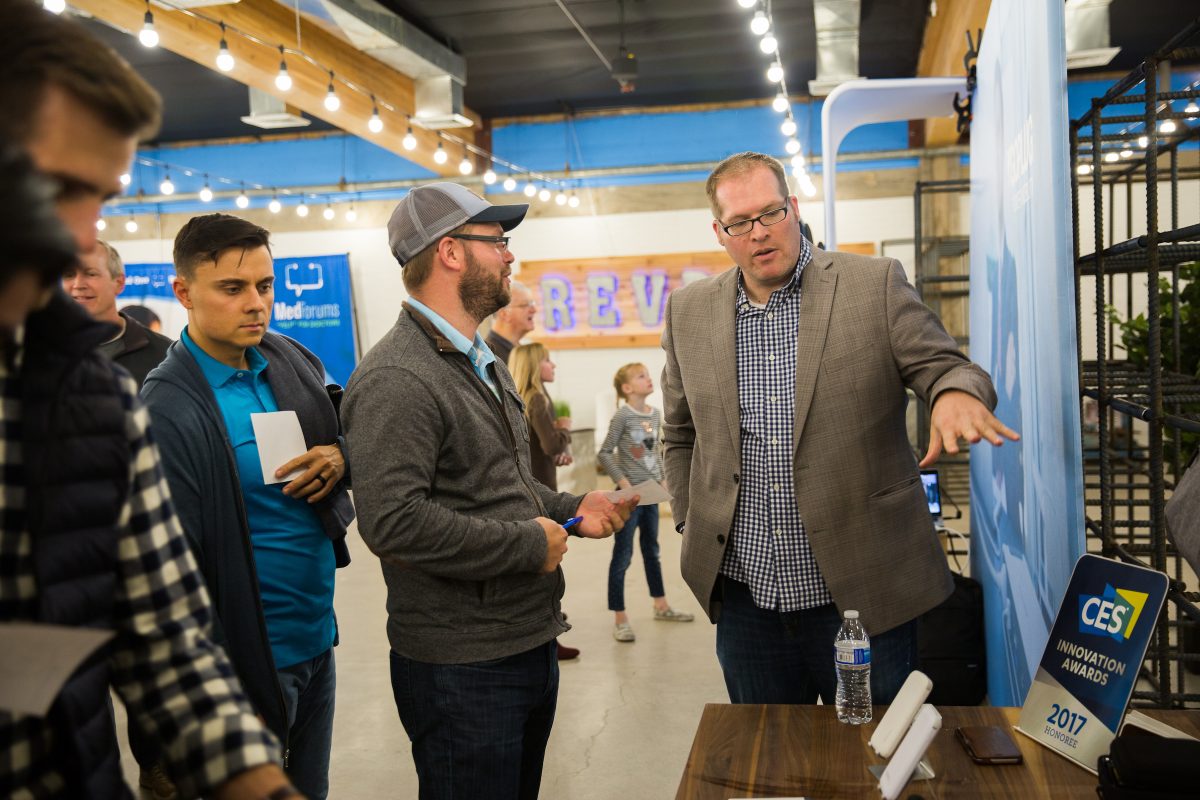 As he traveled for Imagine Learning, Josh noticed that he kept running into the same problem: no way to plug in all his devices, including cameras, chargers, laptops, phones, and lighting equipment.
He lived with the problem for years, finding workarounds such as hooking into outlets behind couches in hotel lobbies. However, these ad-hoc solutions brought their own set of problems: namely, devices plugged into hidden outlets often got forgotten.
It didn’t take long for Josh to notice that many other people had the same problem. It was common to see people huddled around outlets in places like airports, and equally common for people to run out of juice and lose access to their technology in the field. The problem was painful, widespread and costly.
Josh started dreaming up solutions. Fairly quickly, he realized that all videographers — and travelers in general — had to carry bags. What if there were one piece of luggage that could power any device, anywhere?

Josh didn’t have any entrepreneurial experience, but he knew someone who might be able to help: his friend and mentor Derrin Hill. Despite feeling a bit apprehensive, Josh pulled Derrin aside one evening after work. He showed off his early design, built from a standard suitcase with a hole cut in the side.
“It was probably more of an embarrassing conversation than a strategic one,” Josh admitted.
Derrin was thrilled with the idea, and Josh grew more and more confident.
In 2014, the GoPlug project was featured on the crowdfunding site Kickstarter. It was the first powered bag on the site, Josh said. Hundreds of people signed up to receive the powered bag when it was ready. For Josh, that was a sure sign that he was solving a real problem, and that there was a huge market willing to pay for his solution.
Soon, Josh was approached by the entrepreneurial pitch show Shark Tank. Because the product was not ready for market, he decided to decline the show’s offer, and got busy putting his idea into production.

During the early stages of production, Josh noticed that many other companies had jumped on the powered bag bandwagon. Before he knew it, some of them made it to market.
Storms were also brewing on the homefront in innovation and design. Every prototype bag the team tried came out of production very heavy. For travelers, that was going to be unacceptable.
“We had to make a decision about whether to ship or refund,” Josh said. “We did the right thing. We refunded their money, with interest. We wanted to show that we were honest and a company that wasn’t out to steal their business.”

While the competition was pushing their own versions of heavy, powered bags on the market, Josh kept an eye on their success (or lack thereof).
“It turned out the other bags with built-in power didn’t do so well,” he said.
That’s when GoPlug decided to pivot. Josh and his team spent almost a year designing, creating and manufacturing the world’s first smart power bank, which could be easily moved from bag to bag.
“Anything you can plug into a wall can be plugged into the GoPlug SMART Power Bank,” according to the Goplugbags.com website. “Power or charge laptops, video projectors, tablets, phones, camera batteries, and much more– all at the same time. Not only is it powerful, it’s small and lightweight.”
GoPlug took off, and developed a line of portable power products — including solar-powered options. In 2017, it was recognized by CES (the Consumer Electronics Show) with an innovation award.
Another pivot led to an increased emphasis on technology to track and monitor powered bags through GPS technology. Now, GoPlug travelers can monitor where their bags are at any given time through an app on their phone.
By years’ end, traditional luggage companies were taking notice. Currently, GoPlug is in beginning stages of sale or licensing negotiations with several large-scale bag companies that are interested in purchasing GoPlug’s technology.

The Soul of a Startup


Josh is modest about his ideas, and unassuming in his demeanor. He doesn’t want to take too much credit, and is quick to point to one group of people he relied on every step of the way:
“My family is totally supportive,” he said. “There’s no way you can do this without them.”
Josh has since left the world of videography to work as an entrepreneur full time.
“How I feel about being an entrepreneur depends on the day,” he said. “Everybody dreams of having wild success from the start, but realistically, it’s a journey.”
He chuckled, adding that leading a startup is more work than he could have imagined.
“You quit a 40-hour job to take on a 120-hour-a-week business,” he said. “You have to decide what you want to compromise. I’m glad I’ve done this.”
Stay tuned to find out what’s next for GoPlug.
X